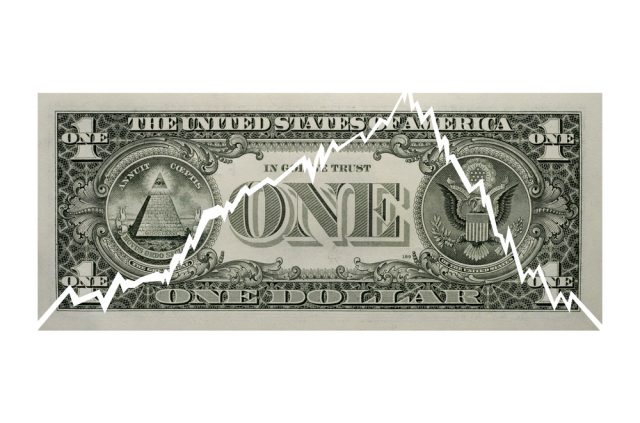 The US dollar slid from three-month highs gathered pace in the Thursday trading session. The currency plunged to one-week lows against the majors as profit-taking took center stage. A softer tone on treasury yields in the aftermath of disappointing inflation figures continued to pile pressure on the greenback.

The Weakness of the US Dollar

The greenback had powered to three months high on the expectation that the US inflation will rise significantly, forcing the Federal Reserve to act. However, that was not to be as data showed prices are not growing much faster than initially feared. Disappointing inflation data triggered weakness on the greenback on Tuesday.

Similarly, the dollar index measures the dollar strength against the majors, extended losses below the 92 handle, plunging to season lows of 91.34 after breaching the 91.50 support level.

The US dollar remains susceptible to further losses as steam on Treasury yields, which offered support for the rally to three-month highs, continues to fade. A strong bid tone on treasury auction all but continues to weigh heavily on yields, conversely fuelling weakness on the dollar.

The US dollar weakness continues to gather pace despite initial jobless claims coming in better than expected. The claims plunged to 712,000, surpassing expectations given that the 4-Week average has so far remained at 759,000.

Compounding further weakness on the US dollar is treasury auction data which shows the US sold $39 billion worth 29-year and 11-month notes at a high yield of 2.295%. It also awarded 37.36% of bids at the high.

Low demand on the treasury auction in January kick-started the impressive run that saw Treasury yields rally to one-year highs of 1.62%. Likewise, there is a growing fear that the strong demand registered with the recent auction could trigger a slide in Treasury yields.

The US auction sales’ initial reaction was the 10-year US T-bond erasing recovery gains and turning flat on the day at 1.52%. The plunge resulted in the dollar index edging lower, losing 0.42% with a drop below the 91.40 level.

While it is still unclear whether the Federal Reserve will respond to the dramatic rise in Treasury yields that have spiked borrowing costs, the European Central Bank is expected to act. With Europe yields also on the rise in the hopes of economic recovery, there is growing expectations that policymakers could send a message that they will prevent bond yields from rising further, a development likely to harm the economic outlook.

Weakness on the dollar was a big reprieve on the British pound, which continued its recovery after coming under pressure early in the week. GBP/USD continues to see strong demand, with the pair recouping all the losses accrued last week. It has since bounced back to one-week highs and looked increasingly bullish.

The strong bid tone around the British pound stems from growing optimism that Britain’s economy could be the first major economy to recover from the COVID-19 pandemic slowdown. The British pound was not the only currency to take advantage of the dollar weakness.

The Australian and New Zealand currencies also picked from where they left early in the week after receiving a boost on a spike in commodity prices. The two currencies were up for a third consecutive session, with both now trading at the highest weekly level against the greenback.